At the junction of Bogus Basin and Hill Road, the streets break the gridiron of downtown Boise. They follow the curve of Crane Creek and sweep into the foothills of the Boise Front, and The Highlands neighborhood begins. With historical mid-century architecture, access to endless outdoor activities, a top-end elementary school and breathtaking views, The Highlands neighborhood remains one of Boise’s most coveted locations.

Set high above town, The Highlands inspires me to unplug. The wide open sky and rolling hills allow for a slower pace of life, while being no more than a short drive or bike ride to Hyde Park and downtown Boise. The neighborhood also boasts a rich history of mid-century modern architecture. 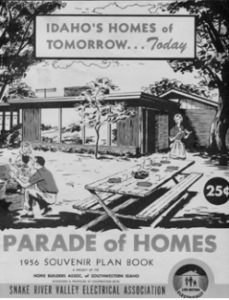 I personally live in a mid-century modern house built in 1954, so The Highlands has a special place in my heart. I’m drawn to the community’s ranch-style homes. I love the big soffits, wood panelling, stone fireplaces, and if I’m lucky, shag carpeting. Many homes in The Highlands retain their original architecture, while others have been remodeled. There are even some spots of new construction. The wide range of prices make living in The Highlands attainable.

More history defines The Highlands via the restaurants on its southern border. My family loves to stop for fresh strawberry shakes at Hawkins Pac-Out in springtime. For apres-ski, we love the Highlands Hollow chicken sandwich. The Highlands has a direct route to premium skiing at Bogus Basin Mountain Resort to the north, and a wealth of sporting goods stores for rentals and gear. McU’s friendly service and wide selection make it a family favorite of ours. Within the neighborhood, Crane Creek Country Club also offers world class golf, not to mention the endless access to the Ridges to Rivers trail system.

Highlands Elementary School is currently being rebuilt from the ground up, with new classrooms for music and gym. Consistently ranked at the top of the charts, it feeds into North Junior High and Boise High School. Both are within biking distance from The Highlands. 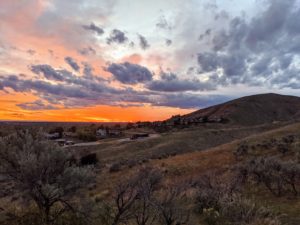 Sunset in The Highlands

The Highlands community history has many claims to fame. It built the first prototype community fallout shelter in the nation in 1961. Before it was demolished in 2016, the famed Simplot mansion also towered over the neighborhood. The mansion’s 50-foot long flag continues flying in the breeze over the lush hillside lawn, where kids flock for ice-blocking in the summer and winter sledding.

For more information about making The Highlands your home, check out my Highlands video tour. If you have questions, feel free to reach out to me at idahohodges@gmail.com.