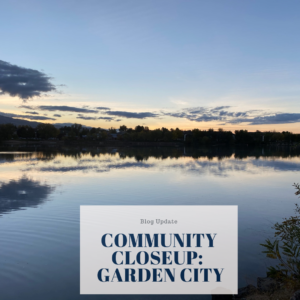 I love to go for walks around Quinn’s Pond at all times of the year, meandering between Boise and Garden City and taking in the beauty of the river. The changes that have come to this part of town consistently impress me. From its varied beginnings to its current status as cultural haven, this former industrial area is now a prime piece of real estate. Those who live, work and play in this area can do so on foot and by bike, and it’s truly become a community of its own. I’m so looking forward to seeing it change even more as the valley grows.

During the Boise Basin gold rush of the 1860s, populations of Chinese immigrants joined the flocks of people moving to Boise. When little gold was found, the Chinese community leased land parcels on Government Island, a 600-acre piece of land that was formerly used to grow hay for the horses of Fort Boise. The channel of the Boise River was different back then, and much of that area is what we now know as Garden City, named for the Chinese Gardens that flourished there. Chinden is the main thoroughfare, and the name is an homage to the area’s history, as it’s a contraction of Chinese and Garden.

Over time, the farms disappeared with redevelopment. With more lax laws and cheaper land than its neighbor across the river, Garden City became a destination for industry. During the economic downturn of the Great Recession, the growth of Garden City really slowed, however. Since 2012 and 2013, the area has grown into a pulse point of culture and community. It’s become a city within a city.

In terms of real estate, Garden City offers a variety of lifestyles. Riverside Village boasts homes built in the late 1990s and early 2000s on large lots with waterfront perks. As the families who settled in this area downsize, opportunities for buyers who want to remodel for their own taste are available. The Waterfront District has more urban layouts that include townhomes and unbeatable access to recreation on the Boise River.

My perfect summer day typically ends with a walk on the Greenbelt or paddle around Quinn’s Pond. Whitewater Park offers endless recreation for kayakers and surfers, and Idaho River Sports can get you geared up.

Garden City’s food and beverage scene has something for everyone. Urban breweries and wineries have particularly flourished there. Telaya has a riverside lawn with fire pits that make it a Greenbelt hotspot year round, while Western Collective has one of the trendiest scenes and seasonal hard slushies and frosé. I also love the wine from Cinder and Coiled, who have tasting rooms off Chinden.

When it comes to food, Gem Street Kitchen’s food truck at Yardarm is a go-to when we walk the Greenbelt. The Stagecoach Inn is a must-try for classic steakhouse fare. Caffe Luciano’s on the river has a modernized menu from The Bench favorite.

Garden City’s retail presence has also grown. Roots Zero Waste Market has made the area fully stocked on local, organic and zero-waste groceries. North End Organic Nursery puts the garden back into Garden City. Boise Vintage is my favorite spot for mid-century modern furnishings. The 34th Street Market on Wednesdays and Saturdays brings local food trucks, artisans and local businesses together on the river. It’s also near Push and Pour, one of my favorite coffee shops.

Garden City has come a long way in terms of high-end real estate and hip restaurants. However, it’s still in the middle of a gentrification cycle and most parts continue to be very urban. For homebuyers looking for walkability, bike-ability and a bright future, Garden City is an exceptional community with lots of potential.